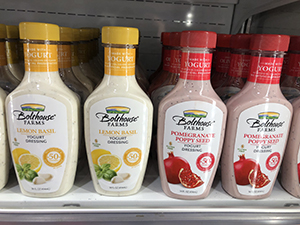 Bolthouse created a keto-specific protein beverage line — separate from its Protein Plus offering — to appeal to people following the trendy diet.

“They have very different nutritional profiles,” said vice president of marketing AJ Bernstein. “The thing about keto is it’s a high-fat, moderate-protein, low-carb diet, so we made sure that the ratio of nutrients in these beverages matched up exactly with what keto followers are trying to get. 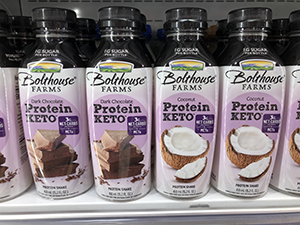 Flavors in the line are matcha, coconut, coffee and dark chocolate.

“The reason that they’re little is because all those functional ingredients don’t necessarily taste great, so you’re not sipping and savoring,” Bernstein said. “You’re like shooting it back because you want that in your system as fast as possible. It’s like drinking a hardcore expresso when you’re tired.”

The final new line for the company is one of CBD beverages, including two CBD coffee products. Other flavors include lavender and chamomile, pineapple and apple cider vinegar, and tart cherry and ginger. Bolthouse is still working on a new brand for line of cannabis beverages.

“When we talk to consumers about what does Bolthouse mean to them, it really means high quality, traditional and very natural and old-fashioned,” Bernstein said. “Those attributes don’t necessarily translate to CBD, so we wanted to bring forward a CBD product that people really believe in and they think that makes sense for the brand, and so we just made the decision that it didn’t make sense for Bolthouse, at least from a consumer-facing standpoint.

“The other side of it is we wanted to do something really bold in the marketplace, and we didn’t want people to get confused if they see something with Bolthouse that’s really bold and then they look over here and it’s very traditional, so it’d just be kind of a disconnect for people,” Bernstein said.

The regulatory landscape for CBD beverages is complex, so the products won’t be available nationwide initially.

“What we’re going to focus on at the beginning is really distributing in our backyard, so we’re from California, so we’ll probably focus on California or maybe up and down the West Coast, and then sort of assess the landscape,” Bernstein said.

Frieda Caplan: A legacy of so much more than kiwifruit